In today’s military forces it is vital to communicate between all forces seamlessly and effortlessly.

Legacy equipment procured through the various forces budgets created interoperability constraints and even within one of the forces, it is not uncommon to find rigid, limited, and uncompromising equipment in use.

A particular brand installed in a vehicle can not be extracted and utilized as a manpack on the move when a vehicle is compromised leaving men without communications, naval vessels sinking with communications equipment leaving sailors stranded in lifeboats since the equipment is rack-mounted, etc.

Missions change, conditions change, and the flexibility to redeploy units are subject to the communications equipment in hand.  Moving out of the VHF range necessitated by changing conditions without having HF radios will compromise men and equipment.  The need to communicate to aircraft from the ground for supplies, evacuation, or air support may arise during changing conditions.  Without GTA capability, such missions will be compromised, loss of men and equipment will occur.

Planning missions which include different forces such as the Army, The Air Force, and the Navy, each with different manufacturers of equipment is a reality and a serious limitation.  The security level and reliability of communications of such combined forces operations are by default determined by the weakest link in the forces.

One force may have the highest level of COMSEC and TRANSEC, but the moment they need to communicate to the next which may have little or no security, the entire mission is compromised.

Traditionally these challenges were created through the necessity to procure communications equipment with limited operational capabilities.  Single-band, single-role radios, different and limited range each with different COMSEC and TRANSEC capabilities create endless restrictions, and the general solution required enormous doubling up of equipment to cover unavoidable shortcomings.

This inevitably results in the need for the Army Soldier to carry on patrol an HF and a VHF radio, and frequently also an airband radio.

It is well known, weight, volume, and complexity in operations are undesirable additions to soldiers operating in dangerous conditions.

Mobile units may have it all covered until the vehicle is compromised and the crew needs to evacuate and fixed-mobile radios are then of no use.  If they do not carry any HF, VHF and Airband Man portables in the vehicle, the crew safety, equipment, and mission are compromised.

Utilizing flexible Multi-Band, Multi-Role radios throughout forces will ensure everybody can communicate to everybody else under most conditions utilizing ONE radio which offers many advantages.

The Sat-Com product range provides a vast reduction in capital expenditure with a major improvement in operational capabilities. 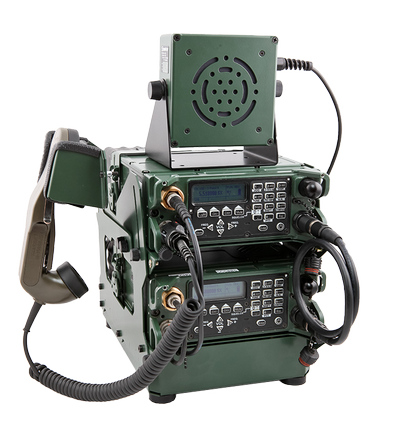 Utilizing 2 Leopard1 manpack radios, the TX output power is determined by the maximum TX power of the radio in a particular frequency band.

This radio only configuration may serve well when deployed with great effective height on a mountain or high hill and may provide a quite large coverage area.

For more powerful solutions, the AFRACAL2 Dual-band Power Amplifier can be included, see out the High Power Repeater/Re-Bro page.

In Cross-Connect Mode,  audio is routed straight through (Transparent) to allow COMSEC (Secure Digital Voice) to be used via the repeater/re-bro.

For semi/permanent in-band repeaters, we recommend utilizing a tuned duplexer and one in-band antenna for TX and RX.

For flexible and on-the-fly repeaters set-up it is recommended to select frequencies carefully and utilize 2 separated antennas for TX and RX. 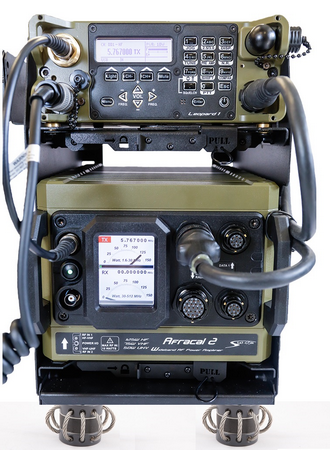 The standard frequency Range is 1.6-170 Mhz, but the same system can be provided with extended frequency option* up to 512 Mhz.

The Vehicular Station could be deployed for low or high capacity communications facilitating all land-to-land (LTL) as well as ground-to-sea (GTS), ground-to-air (GTA) communications.

The Vehicular Station equipment can be installed in any vehicle utilising the various racking options available and is completely waterproof, including the amplifier. 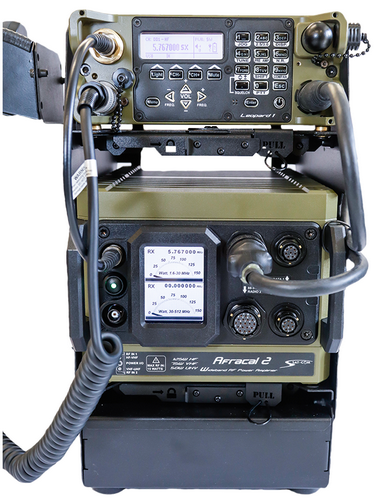 The Sat-Com Base Station HV 1.6-170 Mhz / 512* Mhz utilizes one or two Leopard1 radios as Exciters and the Afracal2 Dual HU Power Amplifier.

The standard frequency Range is 1.6-170 Mhz, but the same system can be provided with extended frequency option* up to 512* Mhz.

The Base Station could be deployed for low or high capacity communications facilitating all land-to-land (LTL) as well as ground-to-sea (GTS), ground-to-air (GTA) communications.

The Base Station equipment can be installed in any place utilizing the various racking options available and is completely waterproof, including the amplifier 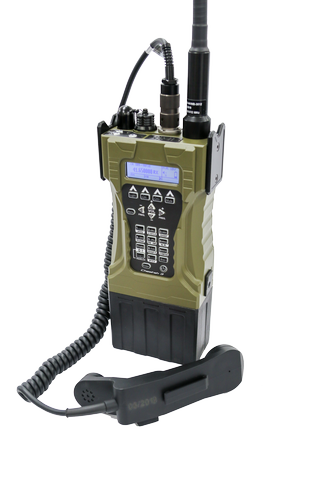 The Cheetah3 is a rugged and compact tactical lights weight and compact MAN PACK RADIO ideal for long-distance and extended duration tactical missions. 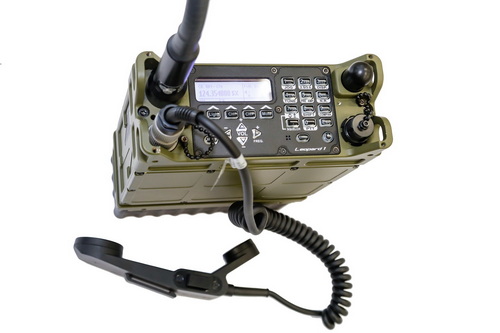 The LEOPARD 1 is a rugged and compact tactical compact MAN PACK RADIO ideal for very long and long-distance and extended duration tactical missions.